Building Leaks Can Lurk in Many Corners: Common Causes & Solutions

Typically, it’s not a question of if but rather when a building will leak water. Numerous studies have shown that more than 80% of post-construction dollars for remediating building deficiencies involve remediation of moisture-related issues.

The tolerance for moisture in the construction industry changed in the 1990s with the influx of mold-related lawsuits. Mold requires spores, food, oxygen, and water to grow. Given that spores and oxygen are almost everywhere and food is abundant, mold lawsuits are really just water lawsuits.

Remediation of mold often starts with eliminating the moisture source, which we will discuss at length below, but also often involves the following:

Example of mold abatement in progress.

As buildings are typically complete and occupied when this remediation occurs, the steps above are costly and can also involve the displacement of occupants, loss of rent, and damage to contents. Hence, the risk for the construction community was significantly increased and as a result many changes occurred including:

As with many construction challenges of today, the problems are not new. However, stakeholder expectations for building performance have increased and what was previously tolerated is now considered an actionable deficiency. Additionally, our design and construction practices continue to evolve such that we are building faster, lighter, less robust, with new materials, with less experienced trades, and with heavy cost constraints.

These changes have led us away from durable buildings with an ability to collect/store water and easily dry out to buildings that are less durable and have very limited ability to collect/store water such that a relatively small enclosure discontinuity can lead to a big problem. Common wall assemblies from decades ago included multi-wythe masonry walls (i.e., mass masonry) that could absorb considerable moisture prior to having three-dimensional water leakage to the interior of the building.

Modern wall example of a metal panel cladding installed directly over materials that are susceptible to degradation from moisture.

Moisture can come from various sources. The three moisture sources discussed herein include:

Water leakage can be deceiving as the source many times may appear obvious at first, but typically requires an involved and methodical investigation to diagnose. Guidance for investigating and identifying water leakage sources can be found in ASTM E2128 – Standard Guide for Evaluating Water Leakage of Building Walls. Key investigative steps within this standard include:

Common interior leak sources, such as a plumbing leak, are often the easiest to diagnose as the leak path (the route water follows from source to appearance by occupant) is typically short and readily visible. An example of an easy-to-diagnosis leak path would be removing a water-stained ceiling tile to observe a leaking sprinkler pipe. In this example, the water originates from the leaking pipe and then drips down onto the suspended ceiling tile where staining has occurred. Remediation of this would be relatively simple as a plumber has access to the leaking pipe and can easily repair. Interior leak sources tend to be constant over time or with a distinct pattern that is not related to the weather (temperature or precipitation).

Condensation-related “leaks” often occur during periods of extreme weather such as frigid wintertime temperatures or very hot and humid summertime conditions. For condensation to occur, water vapor, which is stored in the air as humidity, must hit a surface at or below the dewpoint, such as the face of a cold glass of lemonade on a hot summer day. These types of “leaks” often will dissipate as weather conditions change, causing them to go dormant for long periods of time. They are often much harder to diagnose and are commonly mistaken for interior or exterior leaks.

Fixing a condensation-related moisture issue can be difficult as often there is no quick fix and it typically requires remediation of concealed conditions. The focus of remediation is typically to reduce/eliminate the moisture-laden air source (e.g., sealing an air leakage source hole in the building enclosure or running active interior dehumidification) or raise the surface temperature of the condensing surface (e.g., adding heat to the interior of an aluminum-framed window). 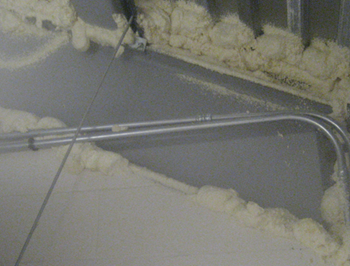 Exterior precipitation includes rain, melting snow, and even groundwater as all of these can cause water penetration and leakage. These are the most common and often most expensive types of leaks that we see with buildings. Water leakage is caused by discontinuities through the building enclosure but can be a challenge to diagnose. For instance, water that appears at a window may not be caused by a hole from the wall above. And water that shows up at the base of a wall could in fact originate from a roof. Often leaks occur during a wind-driven rain event, so weather information can be critical to understanding leak sources. There are a host of diagnostic techniques and testing that can be done and we have provided some examples below: 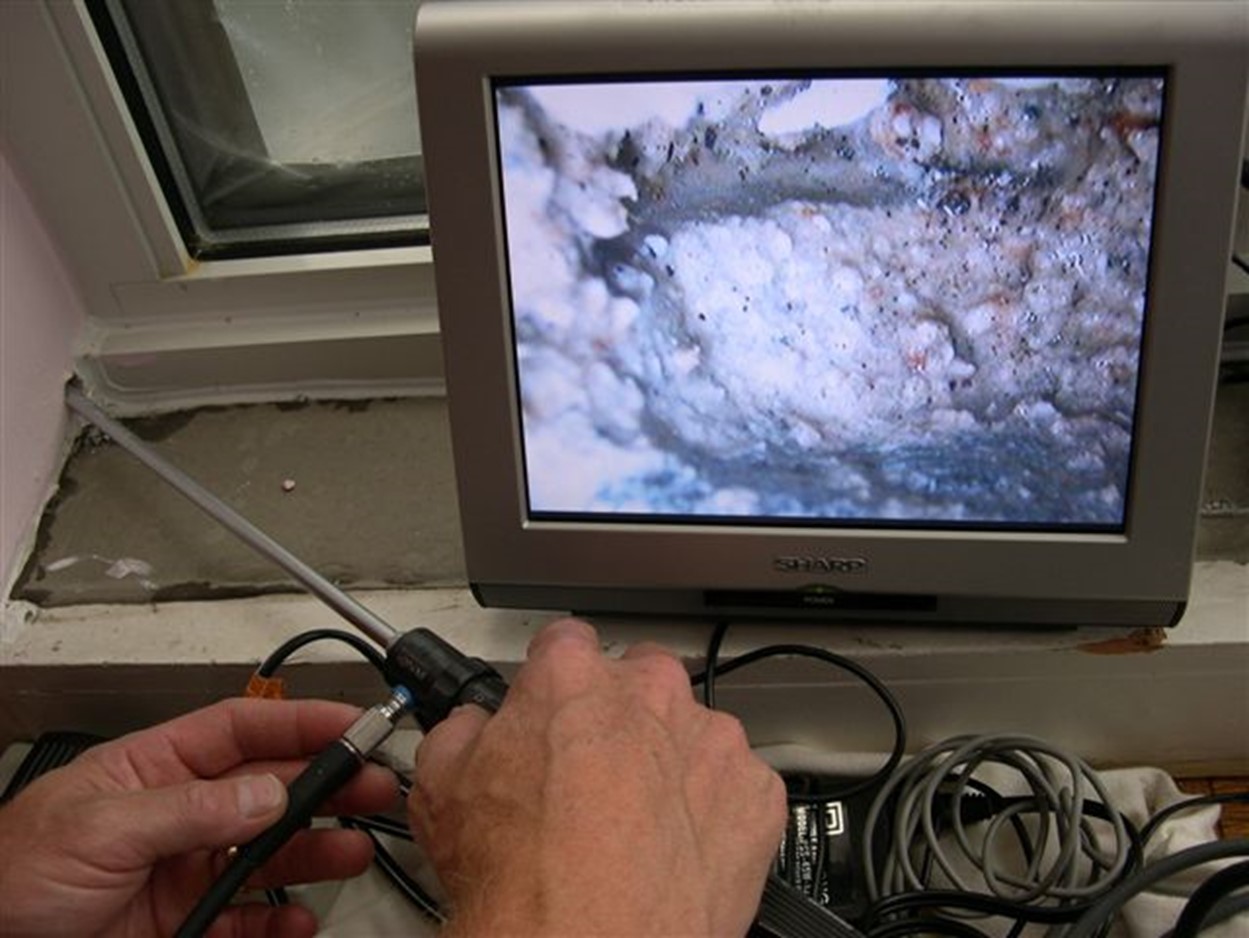 Example of a video borescope to gain visual access of hidden areas. 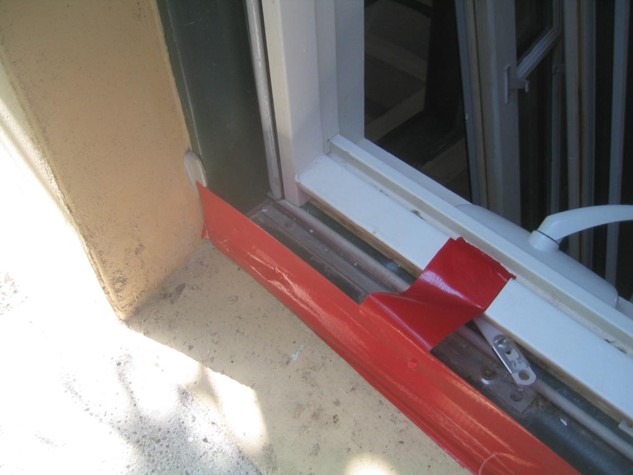 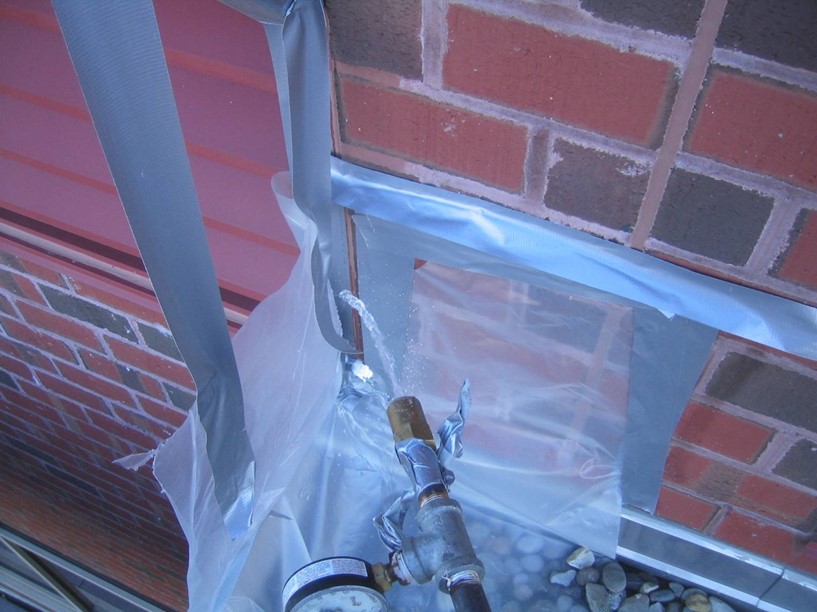 Example of diagnostic water testing; certain components are masked and wetted to determine the source of the water leak. 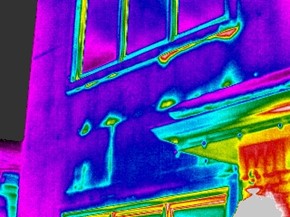 Example of thermal imaging diagnostic testing to find holes in the building enclosure that might be contributing to water leaks. 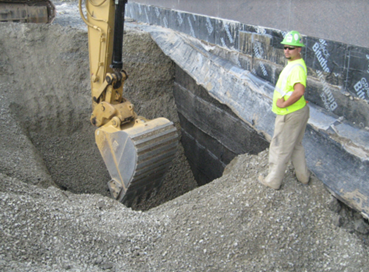 Example of excavation to investigate a below-grade leak source.

The tolerance for moisture in today’s built environment has lessened, both in terms of occupant expectations and building material durability. The challenges in keeping water out of the building are exacerbated by fast schedules, budget constraints, newer (less robust) construction materials, and a lack of experience in the trades. If a building leaks, having a proper plan in place is paramount and should be guided by a methodical process to determine and fix the source of the leak source.

Get our newsletter for news and updates.